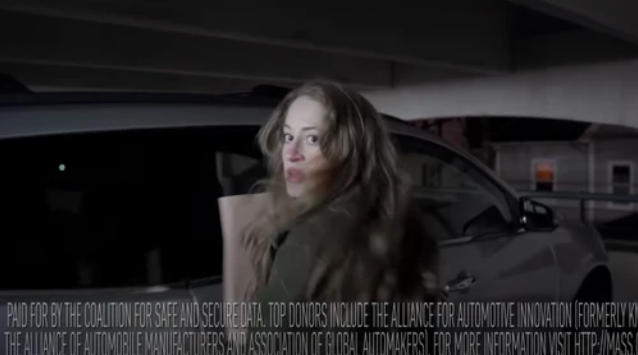 A camera slowly stalks a woman walking to her SUV in a desolate, empty parking garage. “If question 1 passes in Massachusetts, anyone could access the most personal data stored in your vehicle,” a narrator says. “Domestic violence advocates say a sexual predator could use the data to stalk their victims. Pinpoint exactly where you are. Whether you are alone …” The woman’s keys jingle as she approaches her car. The camera gets closer. The woman whips her head around. The stalker has found her. The screen flashes to black. “Vote NO on 1,” the narrator says.

The Alliance for Automotive Innovation, which represents nearly every major auto manufacturer in the United States, is funding this and a series of other TV ads like it to scare Massachusetts residents into voting against a ballot measure that would expand the state’s already existing right to repair law to ensure that you can continue to get your car fixed by anyone you want. The ads heavily imply—and at times state outright—that the legislation would somehow lead women to be stalked and sexually assaulted, a charge that cybersecurity experts say has no grounding in reality. Instead, the auto industry wants to ensure that when your car breaks, you have to take it to a manufacturer “authorized” mechanic or the dealer itself.

The legislation is an update to an already-existing law passed by Massachusetts voters in 2012 that has become a national standard for auto repair and a model piece of legislation for other right to repair bills that would make it easier to fix all sorts of electronics. The 2012 law enshrines the ability for independent mechanics (meaning, anyone who is not a car dealer) to repair the vast majority of cars, because it requires manufacturers to use a nonproprietary diagnostic interface to diagnose problems. This means that anyone can buy an OBD reader (called a “scanner,” a “dongle,” a “computer”), hook it up to a port beneath their steering wheel, and determine what’s wrong with their car. The law also makes repair information available to independent repair professionals.

Read the full story on vice.com.